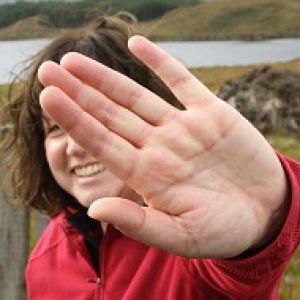 This is the only blip photo where I haven't been behind my camera. The shot was taken courtesy of my other half. He hates taking photos!! Many thanks to him too - he's been through this year with me, even if this is his only shot!!

For my 365th, I wanted to be somewhere I hadn't blipped before, so I chose Formby beach. It's a place I've visited many times once I'd discovered it. This was all because of a conservation holiday I did many years ago (the summer of 1989 to be exact), where we constructed a footpath and fence near Lifeboat Road with the British Trust for Conservation Volunteers.

The beach is long and very flat, with amazing sand dunes. When I was at university in Liverpool, doing my library qualification, I joined their Orienteering Club and have got lost a few times in these dunes trying to follow a course.

There is also a red squirrel reserve here too, but we only managed to see one squirrel today.

SO...... may be I should say something about completing a year with blip??

It's been frustrating, fabulous, fascinating, fulfilling, first class, flabbergasting, frivolous, focusing, but most of all fun!

Thank you to all of you who have been to see what I've been up to and what shot made the day, whether it was ordinary or something more special and exciting. Thanks for you kind words, advice and banter.

I have one apology and that is my lack of commenting of late - I may not leave a message but I do try and see what you've been doing too.