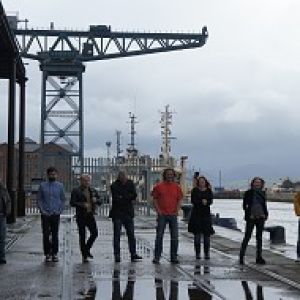 The Last Days of Tate & Lyle in Greenock

... as reported by The Greenock Telegraph.

On August 27th 1997, sugar giant, Tate & Lyle, closed its Westburn Refinery in Greenock.
It was the end of an era which began in 1865 when prominent Greenock cooper and shipowner, Abram Lyle, together with four partners, purchased the Glebe Sugar Refinery.
Tate & Lyle was formed after a merger in 1921 between Abram Lyle, who had expanded into Plaistow in London, and Henry Tate, who had set up a sugar refinery in Liverpool and subsequently expanded into London.
It's poignant to see the sadness etched on the faces of both men in this photograph taken almost 17 years ago now.
The fact they were father and son, only serves to highlight the ties which rooted the sugar industry in Greenock life.

As a postscript, both Abram Lyle and Henry Tate were art lovers, supporting artists in their day as major collectors. Henry Tate's collection went on to form the foundation for the Tate Gallery, which now belongs to the nation.