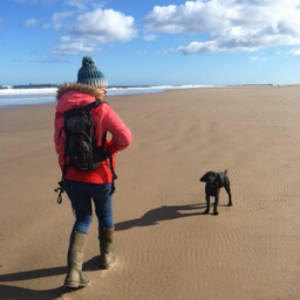 Rory and I headed to Keswick this morning for a week of adventuring in the Lakes! We packed the bikes and the bags into the back of Rory's car and then set off towards Keswick. We ended up going on the longest de-tour due to a road closure which led us down the most twisty road.

Rory took me to Rheged, which is a little shopping centre/art gallery which is built to look like a fortress and everything is underground. It was so cool, there was some art shows going on which were interesting and a little random but as it was a sunday, the majority of the exibits were closed. The shops were really cute with lots of random bits and bobs inside. It was definitely worth the little de-tour to get to it.

We stopped at Ullswater to skim stones and go for a walk around the lake in order to break up the journey some more. Ullswater is incredibly beautiful, the mountains surrounding the water looks amazing! There was a father boating in the lake with his young son and daughter who looked incredibly nervous. The dad jokingly went to shove his son off the boat and into the water, however he pushed a little too hard and the boy fell straight off the boat and into the lake! The boy was wearing a life jacket so all was good, he just looked a little surprised!

Next stop was the guest house I'd booked for us to stay in for the night. Neither of us had stayed in a guest house before and it was a little weird because it was like living in somebody's house but you're only allowed in certain rooms. However, it was lovely.

We headed out to a pub that had been recommended by Rory's dad for dinner and drinks, with some window shopping en-route. It was great to be sitting out in the sunshine having a few drinks without Rory having to think about driving me home later on! It's not very often we get to have drinks together. After dinner, we walked along to the lake to watch the sun setting with the mountains in the background. It was beautiful, and it wasn't even the greatest sunset!

The Lake District is one of the prettiest places I've ever been!