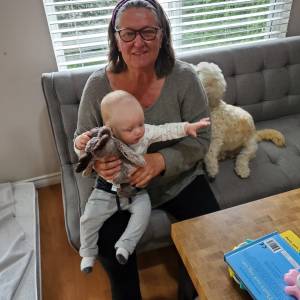 How can i resist another Mary Oliver poem.....just so fitting!

the uneaten fruits crumbling damply
in the shadows, unmattering back

from the particular island
of this summer, this NOW, that now is nowhere

except underfoot, moldering
in that black subterranean castle

of unobservable mysteries - roots and sealed seeds
and the wanderings of water. This

I try to remember when time's measure
painfully chafes, for instance when autumn

flares out at the last, boisterous and like us longing
to stay - how everything lives, shifting

from one bright vision to another, forever
in these momentary pastures.

Finally back on blip!!! Terry and I just returned from a wonderful family (his) reunion down on Cape Cod, a stunningly beautiful little place called Cotuit. We spent just over a week away, a couple of nights in Maine, then 5 days in Cotuit, then 2 in Boston, and back to Maine for one night before the long trek home yesterday. Maine is about 4 hours from Boston, and so we divided the journey - the trip from Maine to Big Hill took us just over 11 hours yesterday! It was a long haul, but a great trip all in all!

I'll get around to back blipping later.....got some great shots of sailing.....i think Terry's family could sail before they could walk! As opposed to me, I'm a complete land lover.....but i did in fact go sailing, and that was the day after I'd fallen in the water, whilst trying to move from the skiff to the dinghy, trying to balance myself, apparently putting some of my weight on the one side of the dinghy is not the way to go - no sooner had terry said...."NOOOOO, you're going in".....woosh, i was in total shock and amazement to find myself in the water, fully clothed and NOT in the boat! It was so fast I was stunned! After the initial gasp of astonishment, and with Terry trying to get me to breath.....we laughed ourselves silly! It must have been a pretty funny sight! He got into the dinghy and towed me back to shore....it was pretty choppy out there, and that was why we had decided not to go for a sail that day- me being a complete novice.....but we did head out the next day, which was beautiful and sunny and I had a wonderful time...and managed to balance myself very well that time - mind you, I wore my bathing suit just in case!

ps...i've filled in most of the back blips starting here if you'd like to have a look!