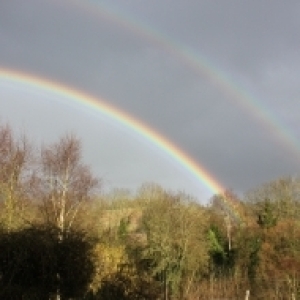 Excuse me but there's a large fish on your roof

Today I had to go to Oxford to do some research for my Mother which went quite well so I decided to take a short trip down memory lane and whilst there was surprised to find this! It's been there quite a while according to this but was completely unexpected for me and I just had to take a picture of it. I later met my brother and young nephew and went for (mediochre but nephew enjoyed it) supper at the Bell (Hungry Horse) in Wallingford and found we were sitting under a picture of the very same roof with the artists name, John Buckley so felt fate had decided that I should blip it for you.