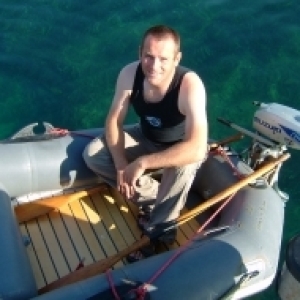 'Out with the old, in with the new'

Having taken the safe route of seeking out training from the Royal Yachting Association and countless hours in the classroom and weeks aboard training vessels, we have found that the instruments we were introduced to have not been used very much at all.

This is not to say that the traditional methods are redundant, but they are very much relegated to being a backup in case of emergencies. Modern day gadgets make our life much easier. We have aboard a GPS that gives us our Latitude and Longitude, to a very high degree of accuracy. This also updates us with our course and speed.

We have the traditional compass and speed gauge but these now support GPS...we even have a backup GPS just in case our fixed set packs in. To further support this we have radar, which is great when the dreaded fog settles.

We came across a young guy James(22 years old) who sailed from Britain in his boat which was from 1929 and used a lead line for depth, had no engine!, and no electronics except a VHF which he rarely used. The only reason he had a car battery on board was to play some tunes...he was very inspirational and was headed for the Caribbean.

However, I don't think this will encourage us to turn our back on the modern gadgets in favour of the traditional route. I like the speed with which I can lay in a course with my laptop, upload it to my chart plotter/GPS and relay this to the helm position. Eventually we plan to have an autopilot, which will even follow the course we set so we can read a book en-route.

I know this sounds all very boring compared to the hands on old fashioned ways, but the freedom it gives you to undertake longer passages and make good time over the ground is so invaluable. You can always switch them off if you want to go 'old school' for a while.