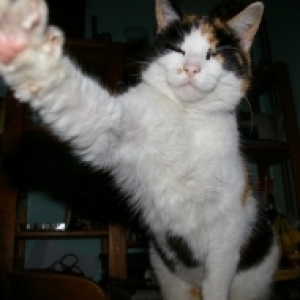 A dismal day today, rain and very low clouds over the Vale of Clwyd. We took a trip to Llandudno where it was a slightly better day and went up the Great Orme.

Had a great walk around the headland with Barney, Meg stayed in the car with Mike as she's getting on a bit now and not quite as agile as she used to be.

Took lots of photo's today, mainly of the Churchyard which stands proudly on the hill side looking out to sea. Some lovely tombstones which made very interesting reading

Here is a bit of history about ships lost at sea off this coast if you are interested and have time to look.

Throughout time, seafarers have said that the Great Orme is a serious navigational hazard. Many vessels have come to grief on its wave lashed cliffs.

Probably one of the best known wrecks is that of the brig Hornby which perished on New Year's Day 1824. To this day, the site of the disaster is known as Hornby Cave, and the surrounding cliffs, as Hornby Crags. The vessel was bound from Liverpool for South America, and came to grief during a northwesterly gale whilst trying to round the Great Orme's Head. Only one man, John Williams, survived the disaster. He was flung from the bowspirit onto the land, and managed to scramble up the cliffs to safety. In so doing, he exchanged the hazards of seafaring for those of mining, and spent the rest of his working life as a Llandudno copper miner.

Many grim reminders of sea tragedies are to be found on tombstone inscriptions. At St Tudno's a large flat stone records the death of Alice Tarrey who died in the wreck of the Rothesay Castle, a paddle steamer on a pleasure trip from Liverpool to Beaumaris, on the 17th August 1831. The ill fated and poorly equipped vessel ran aground on the Dutchman's Bank. Of the 150 passengers on board only twenty nine survived the disaster.

In St George's church yard a simple slate marker records the death by drowning of John Thomas, the Captain of the Cossack, on the 11th November 1845.

In June 1939, HMS Thetis went down 15 miles off Llandudno with 103 men on board.
Four were saved while 99 others perished in the sea.
The dead were 68 Royal Navy personnel, 24 Cammell Laird workers, four observers from other yards, a Mersey pilot and the two caterers who had provided lunch on board.

The dead were not collected from the Thetis until September 3, the day war broke out. The submarine was successfully salvaged and repaired, and commissioned in 1940 as Thunderbolt under the command of Lt. Commander Richard Crouch.
In 1943 Thunderbolt was sunk on Cap St Vito by the Italian corvette Cicogna, which had detected her and attacked with depth charges.
All hands were lost and the sub settled to the bottom of the sea in 738 fathoms of water.

Hope everyone has had a great weekend