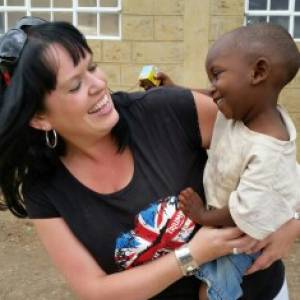 Today was a sad day at Restart as James the retired brigadier who has been volunteering with us for three months finally left us to return to the UK. A group of us travelled to Nairobi to have a final meal with him and his delightful wife Kate, before sending them off to the airport. We ate at a lovely restaurant overlooking Nairobi game park. As with most days in Kenya we had a bit of drama as there was a power cut at the restaurant. We ordered and dined by candle light. The chefs actually cook in the restaurant itself and were cooking by the lights from their mobile phones. Despite the drama, the food was great and served promptly. The picture is of James and Mary who runs the Restart orphanage as they said their goodbyes. I don't think it will be long before James comes back out again and I'm pretty sure he'll stay involved from the UK end. It's been a pleasure working with him and we've had some great laughs along the way.
On another note, we took a 12 month old baby into the orphanage at the request of the child welfare dept. Turned out the boy was extremely poorly, HIV positive with various complications. He was sent to hospital as we do not have the facilities to look after such a poorly baby.
Also the little 4 yr old girl we took in yesterday (previous blip subject ) has settled in really well and was full of smiles when I popped up to the orphanage today.