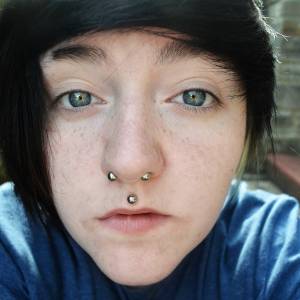 Today we went to 'Seven stories' with the english department, met up with Bethan unexpectedly and ended up travelling there together along with My Holiver, and a few other rogues. we got the bus, and along the way after encountering the toilets in town, we lost Alastair. (Hes not very sociable, so this was a worry, as he doesn't do social interaction, and it was like we'd just lost a 4 year old in a zoo) But we realised he'd ventured off to find where we were due to be, so it all ended up okay.

We had to pretend we were children, so me, Hol, and Bethan curled up on the carpet and grinned at the story teller, who was reading us 'The Hungry Caterpillar' which me and Beffan were very pleased about and were smiling like idiots.

It was such a nice day, though I think I may have angered some people, but nevertheless it was a happy day and I sorted tomorrow's green (as you can see poking out of the ring of this jumper.

This photo represents Holly and Bethan because the jumper is on loan from Holliverbottom, and the green's for me and Bethatron tomorrow, today was indescribably lovely, i've missed her so much, and I couldn't be happier with Hollio, we realised how happy we are today, just dossing about with energy drink and getting lost together in places we don't understand, it's fun.

I saw some people who looked angry today, i've tried being nice but they don't seem interested, but I shant let that come between me and my pals, it's just how I roll and i'm beyond excited for tomorrow. Got a hug off Bethan, twice, she's so cuddly it was really nice. Hope everyone's had a good day because today I really really have.