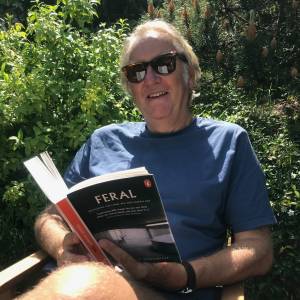 A day of working from home which was enlivened, so it was, by the arrival of exotic birds from da’an sa’ath. So we showed them round the cottage, with the nets drying out in the back green, and then took them ambling down the long path to the seaside and along the rocks and coastal path to the old Chain Pier for some scran. Accompanied by much nattering and laffter. And risqué banter. Not just from me. No, no. These wimmin can give as good as they get. And I don’t need much encouragement, not if I’m given my head, no, no.
But then they were off and it was back to the grind for me before I was chauffeured off to the Diggery-Dogs. With my new augmented reality I could see it’s actually a Pokéstop! Before the first pint had been downed, I caught an Oddish on the table! Exclamation! Beer has been better though - note to self: the £2.50 tap isn’t always a bargain.