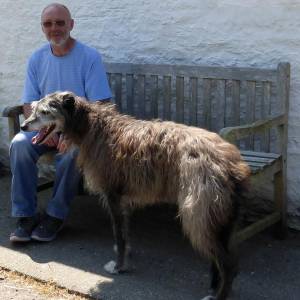 16.8C starting bright with sunny spells. Cloudier later, then rain. Wind to 26 mph with gusts to 36 mph by 5pm.

Grocery shopping over by mid morning. We left Maeve the Deerhound at home, as we have been doing on Sundays for a while now.

Then we went to Westport beach to see if the waves were good. We took Maeve for a walk along the beach. At the north end of the beach it felt much lighter, and there was a decent sunny spell. Then, as we walked along the sand towards Machrihanish, the cloud came in from the sea and it felt darker. No rain though.

There were quite a few people on the beach enjoying being out in the breeze and looking at the waves.
Further along the beach a group of young people were in and out of the water. All in wetsuits and all with surf boards. One or two managed to get up and ride a wave or two while we were there. A few more were body boarding rather than surfing.

When we got back to the car park the surf board hire person was open for business and more people in wetsuits were getting ready to start their afternoon.

Rain started about 4pm. Some heavier wind due later