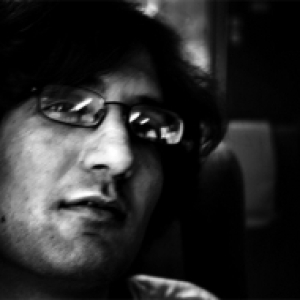 Smoke, lot of buzz, unfamiliar music, and some guys circled around the board of Draft game. A big TV playing a football match and posters of football superstars hanging on the wall. Few boys arguing in the style of fight while trying to guess the names of Manchester United players on a poster.

A whole new world, but an interesting one.
A window to Africa opens and and we see a refreshing sight full of colors.

This shop is on the opposite side of the road where I live. Today when I and Faizan left for afternoon walk, I saw some african guys standing outside Afroshop and decided to visit this place.

Meet Mr. Douala, the shop owner and a unique character -- well dressed, very open, friendly and an interesting personality in general. Mr. Douala describes himself as a World Citizen, in fact he stresses on it. He migrated from Africa to Magdeburg 14 years ago and now is content with his business here. His shop sells african food items, cosmetics and other decoration material specific to Africa. We talked about culture, unity of people and some other topics.

Also met a guy (F.) whose father was African and his mother a German. He shared his personal experiences with us. Talking about another african guy who was killed by police in Dortmund, the point of view was that if the killed person was not from Africa and had not black skin, he still would live. He insisted that Racism was prevalent here from shopping markets to the beurocracy.

"They (?) are clever. They steal our resources from Africa and give few pennies back to us in the form of charity. I was in Africa but the war in my country forced my father to send me to Germany. I want to go back to Africa as soon as possible". -- F

Many people were present in the shop, some were leaving and the others coming in. Everybody knew each other. The whole atmosphere was like of a big family or a big circle of close friends. I really enjoyed staying there as I had never experienced such type of atmosphere in Germany before. While some happily posed for the camera, the others refused. Douala didn't mind being photographed though and was always ready with his sunglesses whenever camera pointed to him.

A bad day with the camera though a very interesting and learning experience with the rest of things. Would like to visit AfroShop again.


P.S. Now I am thinking about the concept of World Citizen. Why is it not possible for us to unite and live together peacefully? A world where there are no boundaries etched on hearts, where humanity and not the skin color matters. After all we are all the same.
Only a mad dream?