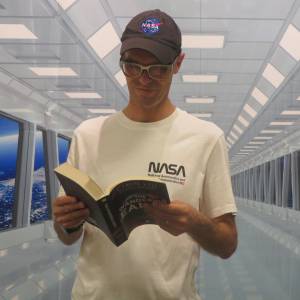 The Seed Of A Lie

Do what you love and and people will love what you do. With his music career dead in the water, Gary Numan decided to make one more album. But this time, things would be different. No more advice from studio executives telling him what to do in order to have that elusive hit. No more trying to second guess the whims of the record buying public. This time he would write for himself. He would write the kind of music that enthused him when he began his career. He would write the kind of off-the-wall material that baffled the music press but appealed to a certain alienated demographic for a while.

Numan had just listened to Depeche Mode's Songs Of Faith And Devotion and, for the first time in a long while, he entered the recording studio feeling excited about music. He wanted to write dark, haunting music in a similar vein. Borrowing images and themes from two Clive Barker novels he had recently read, Gary Numan wrote and produced the album Sacrifice. The album tells a fragmented tale of an uprising by demons from the underworld who, fearing the arrival in their domain of something terrifying, vow to follow their leader, who they call Maker, into taking over the Earth. So we get songs about demonic possession,  immersive nightmares, serial killers, dead angels and enraged and deposed deities. Brilliant stuff! This is what excited Numanoids back in his heyday.

While Sacrifice is far from perfect, suffering particularly from a dull, repetitive electronic percussion, it definitely marks a welcome return to form for Numan and the beginning of steady progress back to the kind of material that made him so popular among people like me with a taste for the bizarre. The "Alienated Synthesist" (as Phil Oakey once called Gary Numan) was on his way back.

Here is my favourite track from Sacrifice; The Seed Of A Lie. Dark. Haunting. Beautiful.

Like your shadow
I will haunt you
Do you remember?
I said to you
'Love is a mountain
But harder to climb
It should be forever
But love is unkind
To me
Don't let me down.'

And you let me down