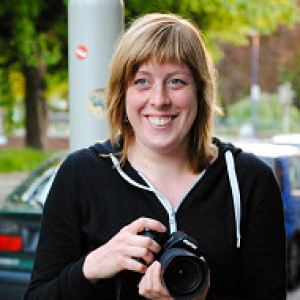 In the morning I packed my bag and left for the trainstation to find out where to go. The train to Venlo was the first to depart, so I went to Düsseldorf. Other option was Bruges, but the train to Roosendaal departed one minute later :)
In Tilburg Ailsa, who was on her way to Floriade, jumped in the train, and we had fun giggling like a bunch of 15 year olds, about the weird habits of our fellow train passengers.

After arriving in Dusseldorf I spend some time on finding a hotel. I chose a cheap (to my standard) 4 star hotel, and was treated like a princess!! haha I know, all you 'cool' smelly backpackers will not approve, but I don't care, I like a little comfort sometimes :)

Dusseldorf is amazing, it has everything that I want in a city:
- old city center
- big, fancy river
- boats
- bridges
- trams
- friendly people
- no laws against drinking in public places :)

As blue hour is starting to be my favorite time of the day, I had to go with a blue hour shot of Dusseldorfs big fancy river (Rhine). Other options for todays blip were blue hour #1, or blue hour #3. The rest of the blue hour photo's I made were ruined by a disco boat decorated with blue LED lights (like the one on the left).