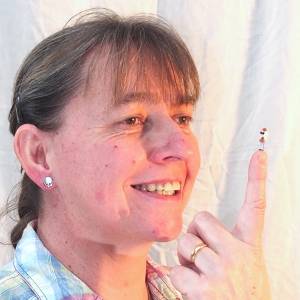 Omo is a White Shepherd (Berger Blance Suisse) ....usually :-)
Today, after his morning walk with J. he has changed into a wolf or a sort of Husky. Okay, it was only mud. (Why???)
In the extra you can see him, asking: " What do you mean, I'm a pig?
And no, I don't agree, that I will need a bath...."
The main blip is after the cleaning with some buckets of warm water, back into the house and resting in some sunrays. (Much better in large)
I remembered Marcus' Experimental Photography EP8.
That's one thing I love on blip: You get so much ideas and the possibility to try different things. :-)

The results for TiPS1 will be announced tomorrow.
I had an insane day, a real murphy.
Some days ago I was told that our former neighbor from Munich has passed away. I have a snow globe with a resting angel inside, wihich I want to send to the widow. I made some photos of it to create a card.
I needed the whole morning with the processing and than the program (for printing it in a store) refused to save it. With he help of J. we solved this problem. In return I cleaned Omo...
T. retured from school with a full set of dirty clothes..
I got a mail from my sister (we stopped our contact 10 years ago and again after we had to cooperate after the death of our parents).
She told me , that my aunt has just passed away. She was 89 years old, but I didn't know, that she was ill seriously.
Later I hurried for shopping and for a prescription to the pediatrician - but I had forgotten T.'s health insurance card and have to return tomorrow :-/
After some more misadventures I arrived in the store to print the card.
To make a long story short: After one (!) hour and the desperation of two sellers and two technicans on the phone, the printer has gotten the lable "out of order" and I left without my card.
I was happy that I arrived back home without any accident :-))