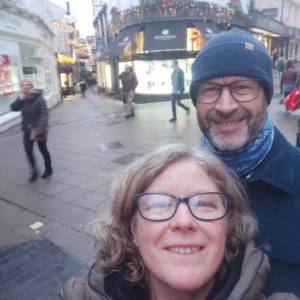 In the knowledge that I wasn't going to attempt the drive to work (We had a contact in Marsham, who said there were heavy snow drifts on the A140 and it was impassable, so that cuts Norwich off for us) I didn't even try. I was up at 8 as Jon was working today from home again.

My day started with the chickens. They desperately needed cleaning out. It was not a quick job. The water had to be brought indoors to thaw too. I filled up their newly clean eglu with lots of hay. I think they must be cold. The good news is that after a spell of not laying, one (I suspect Babs) has started laying again today. They have found a patch of ground behind the summer house where they can dig, but I managed to entice them out for a photo (i like to think by just calling them by their names!)

After my toing and froing from the garden into the house I eventually needed to thaw and it was coffee time. I also thought that was a good time to make hot cross buns. I didn't have currants or mixed peel or caster sugar...but we made do with sultanas and granulated. Oh, and I skipped the pastry cross as that was too much faffing.

After lunch...eggs as we have lots of bought ones to eat up...Henry and I took Bracken for a walk. He enjoyed the snow. It has drifted a lot as Jon was to discover later when he tried to drive out of the village. Drifts across the road on the approach to Aylmerton and one car sideways in a ditch forced him to reverse back up the icy single track road until he could turn round. The other end of the village is similar once you can get out. It's as if it filled up behind us as be drove back yesterday morning....I imagine it like some volcanic disaster movie, lava chasing the tail of our car....ok, it's just a bit of snow, but at present we are stuck here.

When we got back from our walk, I cut up more wood while Henry made a snowman on my car. He is very pleased with his creation. Most people steal carrots from the kitchen...He used ketchup for his macabre scene!

I haven't watched any tv as my outside jobs have filled my day. But there is a nice roaring fire now and a curry almost ready so an evening in I guess....as we can't go out if we want to!

And finally, a very Happy 17th Birthday to my handsome and clever nephew Cameron, who I understand had his first taste of driving today. Exciting times! How lucky that Ware must be the only place in the country not touched by snow. Enjoy your celebrations young man from us all.