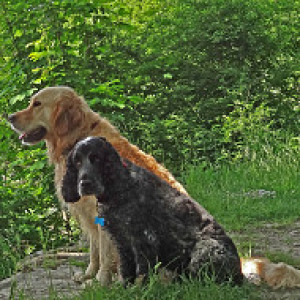 This morning the rain had stopped, bringing the total to 75mm having fallen in the past 4 days. There was nothing to rush up for this morning so by the time I took the dogs out it was nearly noon and the sun was at its weak best. I still wore wellies as the ground is either thick with oozing mud or lying in sizeable puddles. Gladdened by the sunshine I took a few shots of the bracken and surrounding trees, revelling in the difference the sunlight made. However, I hadn't realised that some of the rain had fallen as snow on the hills until I turned to go onto the moor and I rather liked this view with the sun highlighting and isolating the far away snow covered hill and then coming further down the valley to bring some much needed warmth and light to the fields. It even glanced off the larch tree insinuating itself into my shot.

Once home I felt invigorated and after a quick bowl of soup I raked up more leaves for the compost and finally pruned the Autumn Bliss raspberries which, believe it or not, were still producing a few berries until last week. Cara adores raspberries and eagerly ferreted about the fallen canes in search of the odd juicy morsel while Bruce busied himself rootling about in the earth where I was pruning, probably finding all sorts of wee insects disturbed from their hibernation. Hopefully they will quickly find new homes before the weather turns colder as there are plenty of untidy areas of the garden still left for their pleasure.... At least that is my excuse.

Hope you are all looking forward to a good week end.