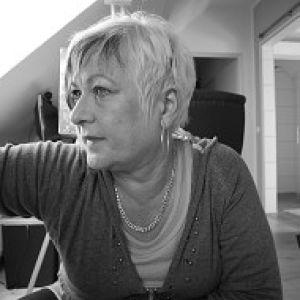 Arthur Dent has had a difficult day. Perhaps a beverage?

He had found a Nutri-Matic machine which had provided him with a plastic cup filled with a liquid that was almost, but not quite, entirely unlike tea. The way it functioned was very interesting. When the Drink button was pressed it made an instant but highly detailed examination of the subject's taste buds, a spectroscopic examination of the subject's metabolism and then sent tiny experimental signals down the neural pathways to the taste centers of the subject's brain to see what was likely to go down well. However, no one knew quite why it did this because it invariably delivered a cupful of liquid that was almost, but not quite, entirely unlike tea.
From The Hitchhiker's Guide to the Galaxy, by Douglas Adams.
The theme for Mono Monday this week is 'near'. While trying to think of something, for some reason,  Arthur Dent's search for a cup of tea kept springing to mind. Thinking that the machine could never get near enough to a cup of tea I photographed my tea pot. By the time I got everything set up and found how to get my camera off HDR and high sequential mode which I had somehow managed to turn on, it was midnight. I checked that I had captured the spiral of 'steam' then packed up and  edited the photos. Horrified i saw my unintentional selfie and all the paraphernalia reflected in the pot. Not nearly the classy elegant look I wanted.
Thanks to 60plus for hosting MM