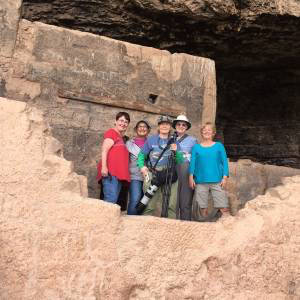 There were a lot of questions and interest in my posts of the development of Robin's Rock.  Robin has now taken the creation home.  It is  called a Penjing Bonsai, in China.  This type of bonsai came from hundreds of years of trying to imitate mountains and trees growing on them in China.    Robin has  developed a strong attraction to this type of bonsai, as is evident in his bonsai.
I asked Robin to take pictures of the Rock and send them to me.  I told him that I would like to make a collage and post on on Blip (because there was so much interest in what he had done).
You can see the rock on his porch, with many other bonsai that he has.  Robin told me the base of the rock is 18 inches long and 19 inches at the top.  The tree is in a basket on the back side of the slightly concave front.   The yellow line is the tape measure he used to try and give the rock some perspective.
In full disclosure, I didn't take the pictures, Robin did.  He emailed them to, I put them together into a collage and posted them.  There was a lot of interest in the rock, I thought Blipper's would like to know where the rock went and how it was being displayed.