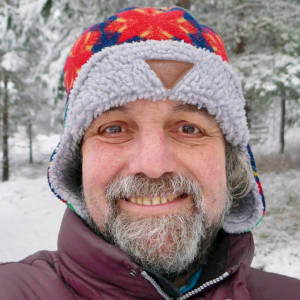 I spent the day out in the garden, getting ready for summer. I placed our deck outside the front door, raked a lot of dead brambles, put the water butts into place, and fixed a few broken bits and pieces, but I didn't take any photographs! So this is a real emergency blip.
We first ate these delicious small fried green peppers in Seville, and were happy to find them on sale in Lidl in Sweden when we got home. The red peppers are there to add a bit of colour. Janet is sitting just across the table from me, reflected in our four-sided frying pan.
From Spanish food to Spanish music...  Yesterday's blip was partly about Vivaldi's Gloria and I added a YouTube link for those who wanted to hear it. Once I'd listened to that, YouTube suggested I may like to listen to Sacred Music From Medieval Spain: The Llibre Vermell And The Cantigas De Santa Maria.
I thought I'd listen to a few minutes. Even though it was the middle of the night I listened for 40 minutes (and still have another 35 minutes to go). A small ensemble using period instruments and a large choir of young people, filmed for TV in a medieval cathedral. Wonderful music!