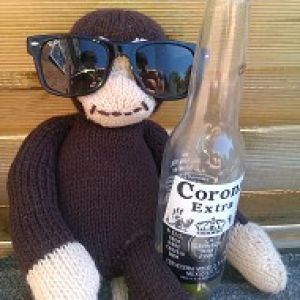 At lunch today Jenny & I decided we would meet for a coffee, like we were in some American romcom or sitcom. How cosmopolitan of us don't you think!?

Jen's particular favourite is the the Gingerbread Latte (small, boring cup at the back), & seeing how good it looked & having had a little taster previously, I went for it too (big, exciting cup at the front with lashings of whipped cream on top!). It was rather tasty! I must be honest, it did make my stomach churn & gurgle a little, which did make for an interesting if not somewhat tense afternoon sitting at my desk, although it was worth it for the taste.

After another quiet day at the Office, things are picking up gradually, we settled in for the evening & finally prepared to watch what we had been waiting to watch for what seemed like many Danish years (actually no different from our own year, contrary to popular belief) - The Killing or Forbrydelsen III.

Wow. Simply. Wow. I know we were slightly behind the broadcast times, but we got there & in quite shocking fashion. Jen & I are still reeling from the final episode. A great series 3 of the fantastic Danish crime thriller series, Sarah Lund (played by the amazing Sofie Gråbøl) was at her best again, her partner Borch (Nikolaj Lie Kaas) was a real dude & knitted jumpers were everywhere to be seen!

David Attenborough's Africa was on again tonight & it is truly breath taking. The plight of the animals in the Savannah drought, especially the elephants & one such baby, is quite sad. Equally saddening, but fascinating too, is the prehistoric stork-like Shoebill bird & it's rearing of its young, quite harrowing really. The birds look quite bizarre & quite evil.

Jen's been cooking peanut butter chocolate squares from Lorraine Pascal's newest cookbook while this horror show has been happening in front of my eyes, & the only thing that will bring me out of this shock is licking the spoons & bowls involved of any & all melted chocolate. Strange, but if it works!?