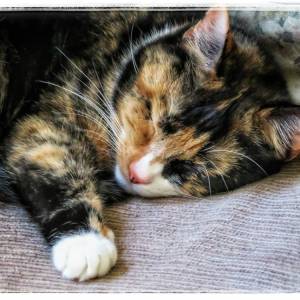 Pause for Paws and a Story

Louisa May, who I also call Lulu, has the most beautiful marshmallow paws.  I just couldn't resist this close-up of them with their wee pink pads.  She is a little imp but like most little imps, quite adorable when she is asleep.  Louisa May Alcott, whom she is named after, never married and never had children but her sister, the painter Abigail Alcott Nieriker did marry and had a child she named Louisa May after her sister.  Abigail died just 10 weeks after the birth and left her daughter in the care of Louisa May who nicknamed her "Lulu".  As little Lulu grew she was a spirited and impetuous child, just like my Lulu.  Her aunt died when Lulu as 8 and she was sent to live with her father.  She died at 95 in 1975.