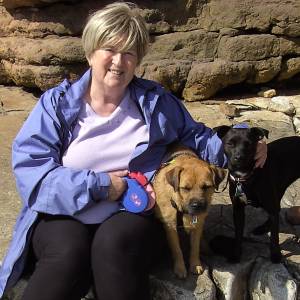 You can get owt from Amazon

I had no custard powder left and after trying 4 supermarkets during this week I drew a complete blank, Paula said "have you tried Amazon" my reply was "Don't be daft you can't get custard powder from Amazon"  20 minutes later she gave me a shout and pointing to her PC screen said " SEE You can get custard powder from Amazon"  so I now have a pack of 3 tins of Birds Custard Powder, it was cheaper to buy a lot of 3, but not as cheap as the supermarket. Ordered yesterday afternoon Saturday, delivered at 5pm today Sunday. The same happened the other week when I wanted to bath the dogs and had no shampoo, couldn't go to the pet shop in lockdown so ordered from Amazon next day it arrived. They have been a blessing during lockdown.

I have to say though some of the online stores are just pushing the price of things up ridiculously, some tins of Birds custard powder were £7 and £8 for one, from some stores online. and I looked up baking powder as I am getting short of that too with having to bake with plain flour, and it was the same exorbitantly overpriced to the ridiculous. I have found though that I can use bicarbonate of soda and lemon juice to replicate baking powder, not tried it though yet.

Well another surprisingly hot afternoon, took up some old wire fencing and then got more weeding done, just a bit more on this plot, which hasn't been touched for ages. The black and red currents are growing well and the raspberries are flowering, although they are Autumn ones but are well on their way.

Hope you all had a good weekend. By the sounds of merriment in one or two gardens nearby some people seem to have forgotten about social distancing, one lot sounded as though they were having a party with quite a few people there, I don't think they have got the gist of this bubble thing.