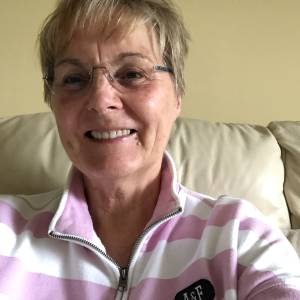 These are just a few of the ones I cleared out of the soil in the bottom border on Tuesday. I have another bucketful.
I have been washing them and have been fascinated by their colour and variety, as well as the feel of their shapes and textures in my hands.
No doubt a geologist, like an old friend of mine called Cecilia, would be  able to tell me all about their types and back stories. Only problem is, she now lives in Cheltenham. Although I suppose I could always send her a photo!
A bitty day today, filling in an on-line Tax return this morning. We have a flat which we let, which presently houses a friend's daughter, and it is in my name. So hence the headache of filling in the form. (But I must confess Stephen did help at times!).
After lunch I went to see if my friend, who finds speech difficult, had managed to get to the garden centre. She had mentioned that she thought she had something else so may not make it.
I needed to buy one or two things.
I bumped into a couple of friends from our last church, and also one of my old neighbours with whom I had spent a lovely afternoon on Monday with her and another friend hearing about her trip to Poland recently.
It was perhaps as well that Bobbie did not arrive as the world and his wife seemed to have descended on the Cafe,. Looking at the queue I thought we would have had at least a 20-25 minute wait for a table,
standing in a socially distanced line.
I got two birthday cards and some spring bulbs, before coming home and resuming my pebble washing!
Stephen had gone to have a coffee at another venue, with a friend of ours.
As he cycled there and back he was caught in a downpour on his return.
The wet clothes are now merrily going round and round in the washing machine.
It has been a day of  intermittent downpours, mainly after lunch. At present the sun is  catching the leaves of the trees opposite in that low golden light which comes at this time of year.
The sky has large patches of clear blue with white clouds moving slowly along.
Soon be time for tea.