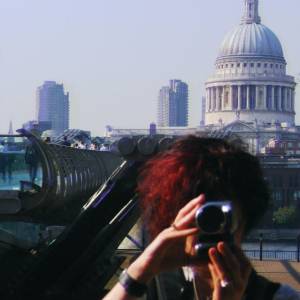 Lady Chatterley and the Gardener

HtP and I were working on the garden by one of the new fence panels. I was away collecting a tool and when I returned I found some people chatting to HtP. People normally ask him for his card but the gentleman asked to take his photo and then when I returned he asked if he could take ours. He kindly sent it to us with the subject above.

After lunch we worked in the back garden. HtP moved weigela that was in the wrong place and planted the hydrangea that I had bought to replace it. While he worked I worked on the winter tubs that will replace the summer tubs by the front door.

After a busy day we treated ourselves to a takeaway.

Have a look at HtP’s blip to see what we did next.