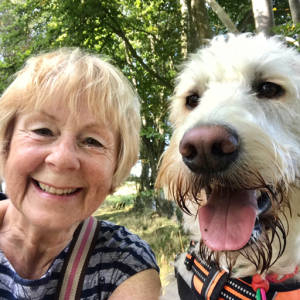 I had to take this in close because I don`t like to see the tags on their ears. For me, it`s just a reminder that they will be killed and eaten.  I haven`t eaten meat for over thirty years, but I love to see cows and talk to them.  This herd was right beside the Coastal Path and came up to the fence to see us. (well just to see Geordie, if I`m honest).  While Geordie was keeping as far away from them as his lead would allow.

Our day did not go as planned.  I thought yesterday that it would be nice to go to Auchtermuchty and walk in Pittmedden Forest.  When I was young I spent a lot of time there with my Gran. Walking through the forest, paddling in burns, splashing in dooking holes, drinking from natural springs with a tiny collapsible metal cup that I have to this day.  One of my most treasured possessions. I have so many wonderful memories of the forest that I get drawn there every few weeks.

Today, however, our visit there wasn`t meant to happen.  My car got a puncture just outside Upper Largo.  I`m perfectly capable of changing a wheel, but nowadays I can`t get the wheel nuts off.  Frustrating, and embarrassing to ask for help.  The RAC  couldn`t get to me for about two and a half hours, so we couldn`t do anything else but go for a walk.

Geordie and I set off down a field track until we came to the Coastal Path, then headed for Lower Largo.  My plan was to get a hot cuppa, then make our way back.  We were just getting to the cafe when the RAC man called to say he would be there in ten minutes.  I explained that I wouldn`t, because I was about two miles away.  It was just over an hour since I`d phoned them.  However, he was kind and told me not to rush, and he would see me when I got there.
Of course, rush we did.  Along the Coastal path, then across the fields, which were all uphill, and back to the car.  I was exhausted and could barely speak to the poor man, who had kindly waited for me.
Anyway, the wheel was changed and we headed to Anstruther where we dropped the wheel off at the garage.  I`m hoping the tyre can be repaired because it is little more than a year old.

After that I felt in need of a treat, so we drove down to the shore at Anstruther, parked with difficulty because it is still pretty busy with tourists, and went to a cafe for that cuppa I didn`t get at Largo.  We had to sit outside because of Geordie, but that was fine.  It was just so good to get a hot drink.

I had such a lovely start to the day, with Maggie.  Seeing her happy face first thing, eating breakfast together, brushing teeth, getting her dressed and brushing her hair and putting it in a ponytail.  Then off she went to nursery.