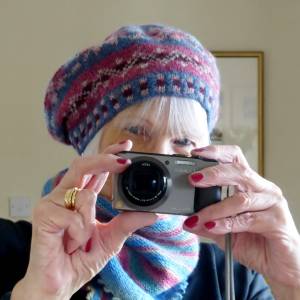 Or un-Fair Game - whichever way you want to view it.

After a very good night's sleep I got up early in readiness to pick up friend Rose (her with the recent knee op) in town after she had been dropped off by another friend to attend to a few jobs. She said she had been to 2 Banks to sort accounts out, but when she came round the corner on her crutches, with bobble hat pulled low over her eyes and a mask on I said to her, you look more like you've robbed the Banks rather than depositing money there!!

Later I took her to a local Farm where we met two more friends in the Tea Rooms and enjoyed a lovely lunch together.  On leaving we saw the results of today's shoot hanging on the fence, which are in extra.

Thankfully it's Thursday so I've texturized  the photo I took to soften the blow  - Thank you ingeborg for hosting.