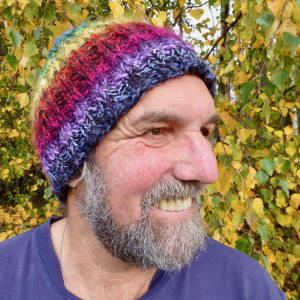 How Many Wind Turbines

Today was a political day - the Works and Planning committee met (Sv. Samhällsnämnden).  Instead of sitting in the town library we went out to look at some of the projects we have worked on, or are still working on.
First out was Västanå, a place I've blipped before, especially the waterfall that is perhaps the main feature. We checked out the new toilet, the redesigned carpark, and the footpath along the river that is currently being constructed through the forest nature reserve.
Next was Eksjön, Oak Lake, (See extra) the lake that feeds the waterfall. We are responsible for a dam that makes sure there is always water to the waterfall, so tourists have something to look at in the summer.  The dam has been problematic in the past but has now been renovated so the tourists probably won't be swept away by a tidal wave!  It was not the best weather for such an outing!
On the horizon in the extra are some wind turbines, which are part of our next destination, Hästkullen Wind turbine park.  The main picture here shows 23 turbines, but the whole park has 73, with another 41 in the neighbouring area. It's Sweden's largest collection of wind-turbines, and one of the biggest in Europe. Locally it has met with a very mixed reception. It has bought jobs and money to the area but it has rather spoiled the "unspoiled" nature. Every year it provides about £100,000 to the area of Viksjö, which is a real bonus to the people who live there. More generally, some modern industries are setting up in the north of Sweden, because there is abundant, cheap, and green electricity available.
It's a difficult question with all the positives and negatives, combined with the need for renewable energy to replace fossil fuel.
However, it does provide some good material for the daily blips!