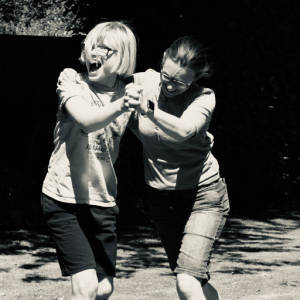 No decorators
left in the van overnight...
well, I would hope not :-D

There have been roadworks on the school run, not very fun.  It means we sometimes have to change route half way to school which makes ben anxious but I'm trying to follow the quickest journey so that Ben has least time in the car (which also makes him anxious..) Bright spot today though -  I was following this van which really made me smile!
I had a visit with my home-start family this morning which involved playing with a happy baby, this volunteering lark is such a trial!!  Then home for a call with a fellow governor which was really useful but it really ran over, right until it was time to fetch Ben, so I was a bit behind but I felt positive about what my next steps are.
Ben had play therapy at school which is often a challenge to come down from, but he did well.  They've started transitioning him out of play therapy and into a little job in the cafe (restocking cans and crisps) before he gets in the car with me and it seems to be working.
His bloods were super high though, so that was a bit of a pain.
I'm on bedtime duty tonight as Mr KCNQ2Haiku is having a drink with a friend so better go and do a bit of PC building simulator computer game before it's too late :-/