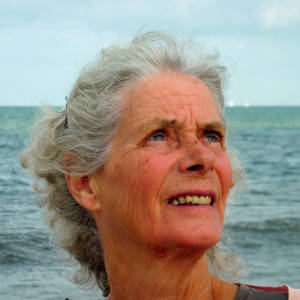 I DID NOT ADVERTISE

but the insects know how to find my garden and they arrive in big numbers. The one in the picture came flying in a hurry, posed for some time upon the white flowers (it is a sea now) and a minute later struggled between the stems.
Eventually I could put a choice on flickr and phoned Mischa for her favourite. She obliged gladly.
Some other pictures here.
We had a lovely sunny day till four p.m. then it started raining and still does.
At the tender age of fourteen my parents travelled in the summer with us (my younger sister and me) through Germany, Austra and Italy till we came in Venice.
Who would not fall in love with this amazing city, I did anyway.
We camped with our two little tents in deserted field at the Lido, the Island with the pretty beach and the big hotels. Campings had not yet developped that started later in time.
One early morning I had stepped out of the tent and walked in the field. I do not remember there were flowers, perhaps not even grass, just sand.
At the end of the field there was a long dike and behind the dike the laguna.
A man in a dressing gown walked on the dike and he sung. I could see he was rehearsing, he was a singer. I am not sure if I recognised at that time that it was an aria composed by Puccini (perhaps from La Boheme) and it made a deep overwhelming impression upon me.
Much much later I imagined that perhaps the singer could have been Placido Domingo whom I adored as so many did. Had he performed in that summer in the Fenice opera-house? Difficult to discover, especially as the building had burned to the ground later.
Listening the other night to some arias on YouTube, I suddenly heard the voice of Ferruccio Tagliavini, singing Puccini. It was him at the Lido I immediately thought.
It must have been him! The same overwhelming impression.
Tagliavini lived from, 1913 till 1995. In 1970 he ended his carreer on stage.
Still I wonder if one can recognise after such a long time a voice!

If the cock crows, the mill turns, the wind blows and the clock strikes, your face stays forever the same as it is.