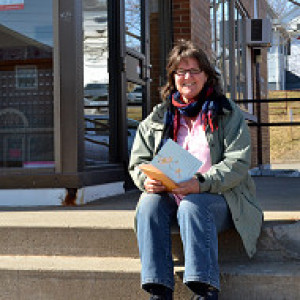 For the past couple of years i've been obsessed enjoying the exploration of heirloom tomatoes! Until then, i knew absolutely nothing about growing tomatoes from seeds. A good friend sent me some of her seeds a couple of years ago, and that's where it all began! my attempts weren't very fruitful (pun intended!) mostly because she grows them in Ontario and we have a very different and much shorter, growing season here on Cape Breton Island! So, this year i found some heirloom varieties from a local grower! Michelle has been successfully growing luscious tomatoes for years.....we'll see how i do!!! By the time i get them into the ground i'll probably have about 40 or more plants! I love tomatoes!

it was lovely being out on the back porch, listening to the birds chirping and the humming birds killing each other...boy they are aggressive little buggers! and then of course was the curse of this time of year here...the blackfly! they had a good feed on me...and because i hate to use that horrible bug spray stuff, it's kinda like a battle - i watch them land (or feel them) and then kill them! of course i miss loads, so i've got a few bites!

just waiting patiently for the kiln to cool down so i can get inside!!!