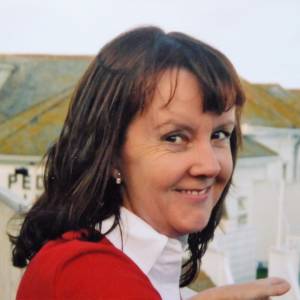 We went to M & S this morning, to do the food shop, and then had coffee & a snack. We were going to stop in Cowbridge on the way home, but the rain was torrential by this time, so we didn't bother. After we had put the food away, Bob, our next door neighbour, phoned to ask us if we wanted some of his home made curry.  He makes a really good curry, so J went around his house, with a dish to get some.   He goes to bingo twice a week, and a few weeks ago, he told us that he had met a nice lady, who is in her eighties, the same age as he is. He had told his daughters, and son, and they thought it would be great for him to have some company. They see each other a few times a week, and he told us it has given him a new lease of life. There's life in the old dog yet, and why not?  I didn't have a blip until about half an hour ago,  so I went out the garden, took this one shot of the red flowers on J's kidney beans, and that   will have to do for today.. Thanks to Biker Bear for hosting Flower Friday.