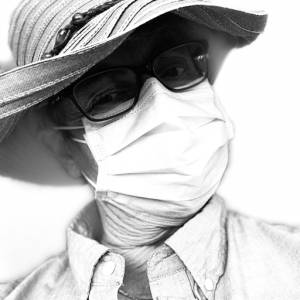 Two days ago I noticed a gazillion buds at the top of this Giant Saguaro (pronounced "sah-wah-roh").  I knew I'd have to keep a close eye on this night bloomer. While performing my morning bird tasks, I glanced towards the street and saw the big guy showing off it's first flowers.  It was still early enough (9:00) that the waxy white flowers were still open.
(Wow, I just looked at it in expanded view.  You've gotta see that!)

To give you a sense of how these cactus bloom, I've put a wide shot as an extra.  That saguaro is ≥ 20 ft/6m tall. I took this (extra) shot at 3:00 and the flowers were already closed.

In my area, where we average about a foot of rain per year, it takes one almost 40 years to bloom.  In drier areas where average rainfall is only 3" less per year, it could take up to 75 years to begin flowering.

The saguaro bloom is Arizona's state flower. Harming a saguaro cactus in any manner is illegal in Arizona.