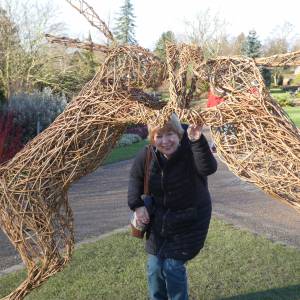 Another really warm morning but very windy.
As yesterday I set off out before Grace left the house and as it was so nice we went across to the play park on Horfield Common. On the way I passed a small encampment of travellers. I noticed yesterday a couple of caravans at the top end of the Common, the bit nearest the main road. Today there were five caravans. There were children playing and a row of what looked like brand new kiddies bikes which almost looked to be on show rather than for use. More alarming was a child sat on the caravan steps with a chain saw!

We went to the Cafe on the Common first where there was just a couple of other people and a couple of dogs to Eda's delight.
They were talking about the arrival of the travellers. I recounted my tale and we had a good old chat about issues they've had before with similar groups. (On the way back there were a couple of officials there and one of the white vans had it's radio blaring out right next to someone's garden fence)

To my amazement when we went to sit down this 'dragon/ damsel' fly was sunning itself on the bench. I've never been so close to one and didn't expect to find one here. It is alive. It kept moving its position but didn't fly off. Think it may have been drying itself and I was intrigued watching it moving its head. Didn't have my best camera for macro but I was quite pleased with this, especially the shadows of its wings, so it had to be my blip.
We went on to the swings and Eda had a good time as usual. I popped across to Tesco which I hadn't realised is just hidden behind a hedge across the road. I'm making meals for the next couple of days so Grace has something to take with her and she is working full days tomorrow and Friday and then going straight to the theatre, so I wanted a few things for a Coronation chicken which she can take with her. Waiting for the green man a lady said did I know a tree had come down at the bottom of the Common? I said yes I had heard at the cafe but hadn't been down by the Bowling Green where I believe it had happened.
I think I'm becoming a local, I'm even learning to ask for a Laarteee!
(By the way the opening night was fantastic and got great reviews. Grace was mentioned for her voice and performance and was even praised by the person who holds the license for the play - can't wait to see it!)