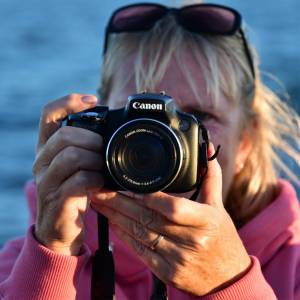 For a long time, I’ve wanted to see The Kelpies which are an amazing sculpture by Andy Scott, and today was the day!

But before that, I joined David and Lola for a walk on Gleneagles Moor. It was a lovely sunny morning and in no time I had to take my jacket off, quite a contrast to yesterday! David spotted a deer and I’d taken my zoom lens with me so I managed to get a few shots although it was very distant.

After our walk we dropped Lola off at home, loaded my bags into the car and I said farewell to Alan, after having a few photos with him :-) and we set off on another driving tour. First stop was a gift shop in Auchterarder to see if they had any Highland Coo ornaments, but they didn’t. We then went to Broadslap for lunch which was great as I’ve read about it often in Diane’s blips.

We then set off to see Arria, another of Andy Scott’s sculptures which you can see in my extras. She’s absolutely beautiful! And after a quick toilet stop at Tesco we carried on to the Kelpies.

I wasn’t disappointed, they’re amazing! I took countless photos, including a Kelpie Selfie - what a surprise lol! I think D & D are used to my selfie stick now ;-) and the best bit is that I went into the visitor centre and they had some Highland Coo’s so I treated myself.

By the time we’d finished, we were a bit early to go to the airport, so they took me to see the Falkirk Wheel. I thought it was a big wheel that you could sit in, but it’s actually a very impressive engineering design to take canal bats from a canal at a higher level to the one at a lower level. After our visit here we were still too early to go to the airport, so we stopped of at The Boardwalk which is a really nice bar, for a drink.

I’m now at the airport and am due to board my plane shortly, so I’ll say bye for now.