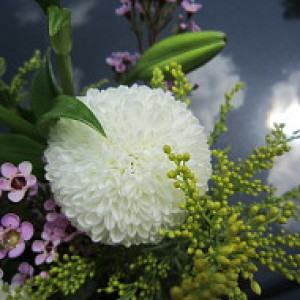 A different type of Christmas Day for most people, including us.  Mostly, because Peter had to work.

So, Alexandra came over with the girls for their presents.  They stayed for a few hours before leaving to go to Peter's family.  Peter was to join them there, but he was still at work when they left here.

Not a very restful time for either of them, Alexandra didn't get home till nearly 7pm last night,  and she has to be at work at 8am on Boxing Day.

After they left, I took some flowers up to Christian.  Alexandra and the girls were there.  She'd gone there on the spur of the moment.

Back home I made some prawn sandwiches, we didn't bother with a turkey this year.

I then spent some time, trying to track down those 2 pieces of music, I wanted from the concert.

And I found them!!

Alexandra found out one piece was by Vanessa Mae, the violinist.  But not the name of the piece.

I found some youtube videos of her and on the 3rd one I found the one I wanted.

The second one was a bit trickier, as it was a French singer.  In the end I watched the video again and listened more carefully to the words of the song.

Typed in what I thought it was and, found it!!  It was by a singer I'd never heard of.

Unfortunately, I may not be able to buy the cds.  The Vanessa Mae one is quite old.  And I doubt the French singer is even sold here.  I'll probably find them on ebay though.

Still, I'm pleased I found them, and I can at least listen to them on you tube.

So, a very quiet Christmas Day.  I didn't even have to hand out the presents as Isabella could read the labels.

You'll notice in the photos that Isabella has lost her first tooth.  What are the chances that Santa and the Tooth Fairy had to come on the same night!!