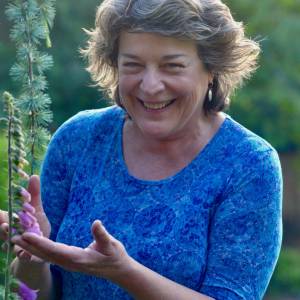 A downright miserable day with the high temp of 105F/40.5C and this afternoon the smoke from the wildfires moved in. It's godawful outside, although not as bad as last year's wildfire smoke (the source was a lot closer then). The grandchildren and I stayed indoors the whole day, but we had fun! We put together a dollhouse and an ambulance (granddaughter's request) which we played with all afternoon in the nice, cool, family room. My grandson played with us too, and brought his "construction vehicles" into the melee.

After I dropped them off I went (gasping) out to the garden and was surprised to see pollinators on this lovely dahlia. It's in the Asteraceae Family (same as sunflowers) and although some dahlias bear a good resemblance to those daisy-like flowers (with the center disk and surrounding petals) this one never did. But now I can see what the pollinators are after...I'd never noticed that before. Or maybe I cut all the dahlias before they reached this stage of maturity! At any rate, this is, I believe, a Brown-belted Bumble Bee and I think, some sort of Paper Wasp...not what I really want hanging around, but I guess they need to feed too. At any rate, it was more interested in the dahlia than me!