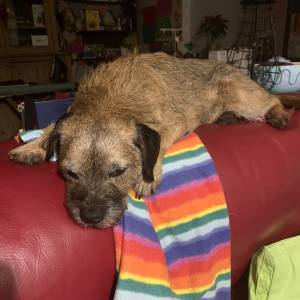 Some old friends from the Scottish Borders have brought their caravan to County Durham for a few days away. They came to lunch with their son and Stanley and Oliver, beautiful cockerpoos, Oliver white and Stanley, who started out chocolate brown, is now much more mink coloured! Lovely dogs. Reg and Stanley, much the younger at just two years old, had the best time racing and chasing around. Lots of rough and tumble but finally both collapsed and slept after about an hour! Reg hasn't had the opportunity to play like that since we moved here and it was wonderful to watch them living their best lives. Our friends said it was great that Stanley had found a match in Reg as usually other dogs are frightened off by his boisterousness and won't play with him. I wish I'd taken photos but we were so busy chatting and catching up and enjoying lunch that I didn't take any photos at all. Luckily I'd taken the photo of the cheese and chive scones as there would have been no blip for today! I'd also made bread, two soups and a cake. There was plenty of leftovers so I sent them away with a goody bag for their supper.
It was a super, very convivial day.