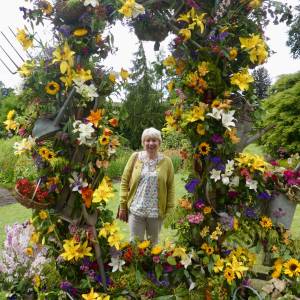 A glorious blue sky day again but boy has it been cold out there!

We have a climbing rose in the corner by the kitchen window at the back of the house. It climbs up onto the garage roof and the leaves and petals blow off over the roof and accumulate on the kitchen doorstep at the other side. This will go on for weeks now. This morning I went round the side of the house to get a brush to sweep them away.

This area not only houses the brushes but the recycling bin and garden waste bags between the bin screen and next doors fence. Returning the brush I took another look at one on the plants that has made it’s way through the fence from next door.
Interesting enough for a blip I think.
I went back with my phone to take another shot with my PlantNet app. It has identified it as ‘Leycesteria Formosa wall’ or Pheasant-berry. Can’t say I’d heard of it but it does look rather nice. There is some sort of dark leafed climber coming through too which can just be seen on the far right of the blip.
I may have to take a snap of tgat with the app too.

Thank you all for your nice comments on yesterday’s blip and photo of Grace.