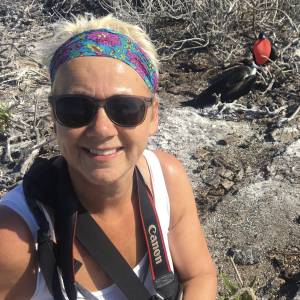 Abstract Thursday thankfully means an indoor blip as yet again it’s dull and miserable - though in fairness, relatively dry.

I don’t even bother to take my camera with me to Llandudno - though there is a brightening in the sky which makes me wonder whether this was a mistake. It wasn’t; the clouds quickly close up once more.

I do however have an interesting conversation with one of the staff at M&S. She seems to recognise me and asks if I have a son who’s 36. I presume Daniel must have been at school with her son, but no.  She gave birth the same week as I did and remembers me as ‘the mother of the big baby’. Apparently I was quite the topic of conversation - but then again, he was 11lb 5oz and looked like a sumo wrestler! I’m amazed she recognised me - obviously I’ve not changed that much in 36 years!

Other than that, an uneventful day which ends up with binge-watching three episodes of The Crown. Really disliked the first episode which we watched last night, but there’s something strangely addictive once you get into it!

A poor excuse for getting behind with blip, but please excuse the very brief or non existent comments!

Thanks to Ingeborg for hosting!