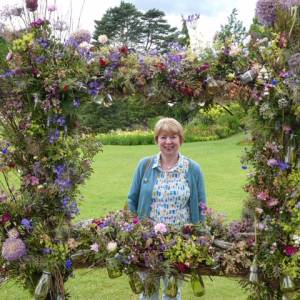 Woke up to more snow over night. We now have the most snow here since March 2013, 5 years ago. I remember it well as we were just back from New Zealand thinking we had missed the winter!

It continued through the morning and though it has now stopped we have a howling wind that is blowing it all over and creating drifts.

Poor Blackbird had to dig his snow hole again to find his food this morning, but the Starlings and the smaller birds were at the feeders. I liked the Starling with his flapping wings but couldn't resist the cross look of the Goldfinch looking right at me, so you've got both.

It's the South West that's in for the worst weather today, they've not had much so far. Son in Law John has got an early train home from work as there is a red weather warning for the SW and Wales and the trains could be disrupted. Storm Emma is on it's way and will clash with the cold air causing blizzards apparently, so take care all of you down there.

Grace sent me a picture of Eda yesterday as she was 5 months old! Extra. Unfortunately she has a temperature today and Grace managed a quick trip to the Drs before the weather set in.

We're not off the hook yet. Thank goodness the Panto finished last week. I'm going nowhere!